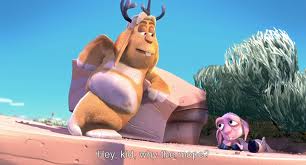 Theres been some interesting chatter lately about what the best ways are to motivate AP personnel.

As if this were some kind of strange phenomena and they were not people themselves; its definitely kind of a weird question.  I think it essentially boils down to a more fundamental one,  How do you motivate people in the context of a thankless and difficult processespecially when faced with transformation?  This is more relevant in the light of change, when you consider that many organizations are going through the AP automation transition process, and so it becomes focal to figure out a way to rally the troops through challenges and onward to victory (cheer, cheer for Old Notre Dame!).

So, rather than taking a professorial standpoint, well turn to some insight from the sage of the sage, the rare hare of hope, as Disney/Pixar so eloquently put it in Boundin.  Instead of focusing on Accounts payable automation, AP software, invoice processing, or other technical tips, well make this much more practical.

1. Operate with a servant-leader mindset.   This doesnt mean just prioritize, delegate, and administer.  It means serving.  Probably one of the greatest leadership truths was uttered over 2000 years ago, from someone who has compelled the following of billions of people during that time.  The greatest of you will be the least of you, the servant to all.  - Jesus  When we serve others and help them with their challenges, we create the opportunity to speak into their lives in a powerful way.  If theyre not open to you speaking to them (and receiving it), then youll be talking into the wind.

2. How much do you care?  There is another saying that people dont care how much you know until they know how much you care.  Taking the time to learn who is on your team (in any setting) pays dividends.  Im not saying you have to be friends with everyone on your team, but to show yourself kind towards those who are on your team, generally goes farther than being a bulldog.  Obviously, at times you may have to be more stern, depending on performance/attitude/communication issues, but having an iron fist is not the way the to approach motivating teams.

3. Be polite!  Its an amazing life lesson that was instilled in me when I was a kid.  Common courtesies like Please & Thank You are rapidly becoming part of a forgotten post-modern lexicon.  You dont think so? When was the last time you were in a fast food joint? Observe how people order today, especially the under 40 crowd.   Youll no doubt run smack into the Can  I get a __________?  No please. No thank you when delivered.   How are you asking of things from your people?  Are you asking? Are you mandating?  Conduct a mini sociology experiment, and test it out if you suspect that youre being overbearingyoull be amazed at the results!  Ive never had someone say, stop, youre being too nice. (Think of the dinner scene in What About Bob?)

4. Be clear.  Be specific when laying out responsibilities and duties with respect to the day to day activities as well as for specific projects.  Anyone who has to constantly adjust their role based upon shifting sands is bound to get frustrated.  A simple way to prevent this is by establishing concise and accurate directives for your people.  The same goes with shaping process and procedures.

5. Praise in public and Critique in Private.   Its ok to praise in private too, but never, ever  criticize someone in a public forum.  Thats a great way to tear someone down and create the opportunity for a potentially irreparable rift.

6. Reward outstanding contributions.   Tom Watson at IBM is credited with creating the Gold Banana for rewarding an employee for a significant contribution.  Apparently, he was so excited with their effort that he gave them what he had available at his disposal.  At the time, it was banana, and so from that simple, funny gesture, the culture of the company was changed for the better as it became a term of endearment internally synonymous with great performance.  When budgets are limited in this wayget creative.  Some people can run a long time on sincere praise and recognition, and you should never lose sight of that.

We hope that these basic principles in dealing effectively with people are a refreshing break to some of the technical insights you typically receive on our blog.