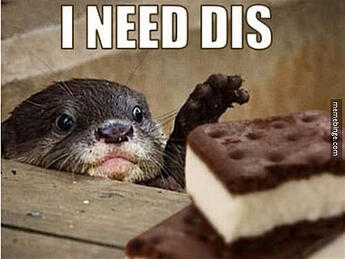 Boldly going where no AP blog would ever go...

I’m feeling a little whimsical today, so with that said, I thought it might be a good time to break out a top 5 list of ways to deal with the stresses of a manual AP process.  What’s that? You’ve already automated your Accounts Payable process and you’re life is now stress-free (well reduced stress at least)….? Well in that case, you can read on for sheer enjoyment and anticipation’s sake, but I digress.

Seriously though, Accounts Payable can be an extremely under the gun department in any organization.  Pressure from suppliers and internal resources are daily occurrences in even the best of companies, and yet AP professionals have to maintain their poise and professionalism without breaking down into a Jerry Maguire like meltdown.

So what’s the best way to deal with over-stressed situations…?

According to the American Psychological Association there’s a pretty compact list including the following:

-taking a break from the stressing task

All of these are well and good, and have certainly withstood the test of time, but for our purposes today, which are FARCICAL, they are impotent.

Wouldn’t it be cooler if whenever we encountered stressful situations in AP, or anywhere else for that matter, we could do the following:

This a test of the emergency blog joke system and not to be taken seriously at all.  However, for your own personal amusement and pyschological well being, you are advised to read on.

-As WW (Walt Whitman not Walter White) so eloquently penned, “sound my barbaric yawp over the rooftops of the world?” Seriously nothing beats a good yawp…or for those of us who weren’t steeped in Victorian period poets, a hearty shout is sometimes the only thing you need to clear your head….and the air. Just make sure you’re coworkers are prepared for this because it tends to produce a visceral reaction in cubicles the world over.

-As a second to screaming, physical violence always plays a memorable role in the office setting.  Consider our subject compilation here…wouldn’t that be a truly remarkable means of coping with the stresses of dysfunctional systems?  One thing to be noted for safety’s sake, it’s never advisable to freak out on others, but sometimes hardware has it coming…especially the copiers…sheesh.

-Smile & laugh.  Oh wait, that seems a bit redundant from the list above, but the truth is that merely a Mr. Roger’s smile and mild chuckle. Better than that perhaps a lingering laugh, a real down to the gut, get me committed laugh…something that tells your co-workers, uh-oh Suzy’s blown a gasket type thing, again in a non-threatening way.   Inflection is always key to a good laugh…if you change octaves enough people you know you’re serious about the funnies.

-Ignore.  No seriously, just disregard it’s happening.  Carry on like there’s nothing in the world going on. Set your face as flint as they say and just keep on trucking.  Granted this may not get you very far when it comes time for reviews and pay raises, but hey, at least you’ll carry your own little slice of utopia with you wherever you go.  If you don’t take it from me consider that it is a definite method for denying attention getters from their fifteen minutes of fame as they strive for co-dependency. Another potential downside is that nothing improves…or gets done at all, which may not be a bad thing depending on your prerogative.

-Cry into a pint of ice cream. Literally, just let the rivers flow right into your Ben & Jerry’s or Haagen Dazs, pick your poison. Lactose intolerant? Then there’s got to be a Sorbet for you. Overzealous foodie…? Find a gelato to sink your spoon into.  Anyway you slice it, it’s a great mechanism to deal with the traumas associated with modern business challenges.

Now that our preposterous list is exhausted, there’s a holistic alternative that might actually do some good. Granted that it is dressed up in overalls and will entail work, but there’s nothing like a healthy AP automation initiative to help you when the stresses (invoices) seem to blot out the sun.

Ice cream or not, we hope you found this enjoyable at a minimum!